What I've been up to lately...

It's not very much, as work is my "supreme ruler" since the hollydays, and I get home really late, but I've managed to squeeze some fun time inbetween! That's exactly what I did the weekend before, when I visited Blondi, we had a nice cup of champagne, to celebrate life and our old habits, which trully die hard! 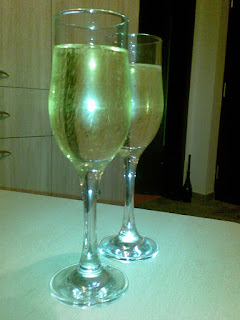 I find it really nice that after not seeing eachother for more than one month, when we did meet, we had so much in common and so much to talk about! And it's really nice to have someone with similar thaughts to share your joys and your problems with! Who wouldn't feel trully blessed to have good friends who listen and understand? I just hope I'm keeping my end of the bargain and do the same for them!
I've also been trying (!!) to eat healthier, and not at night when possible, ate smoothies as often as I could, and when not- fruits; 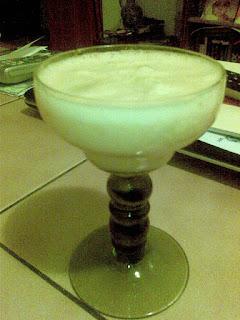 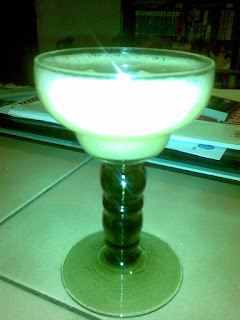 this time of the year oranges are great, even though shurely not as healthy as in the mediterranean countries, where Romania imports them from! Still, better than nothing, right?
I've been making a habit lately, and I don't know if it is ok, but I've been more and more at my neighbour's- Tunde, who's been cooking great meals, as this duck with orange sauce: 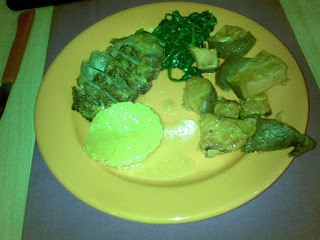 the photo taken with my old work phone doesn't do it justice, it looked great and was trully yummy! And I just have to mention that the duck was home-grown by her mother, thus being 100% organic! I've been having an obsession lately for bio/eco/organic stuff, especially after seeing some material on the net about modified food which makes your hairs stand up!
I've been also playing alot with Baby, whom I just realized is the doggie I can't afford to have right now: 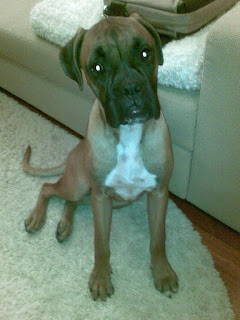 just look at that preety face! 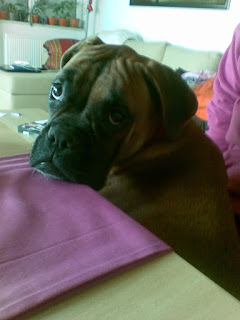 this is the sad guilty face she's making after you've been mad at her.... 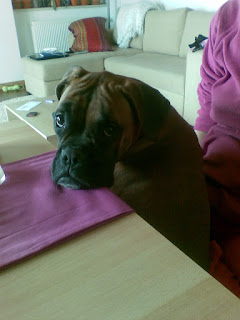 and of course you just have to give up....and this is her way of staying on the floor next to you when you're eating at the kitchen table...and she's under it...
My cats have been less destructive this past month, exception this flower 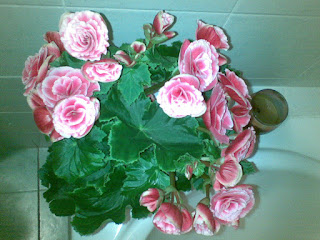 which I don't have a recent photo of, but she's been all chewed up (and I had to move her in my bedroom, which is already full of eatable flowers, in order to save them from my cats) by this handsome fellow: 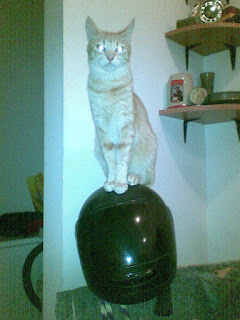 who can be so cuddly at times... 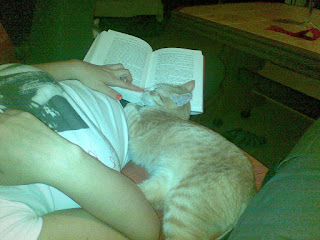 yet a real devil at other times! and that especially when we're not looking! Jackie is just her old self, with funny stupid faces when she sleeps: 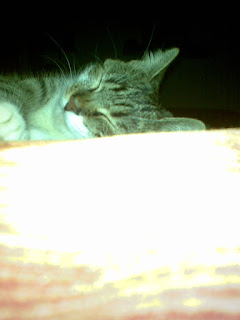 ...and Sheeba is just the same defying lady: 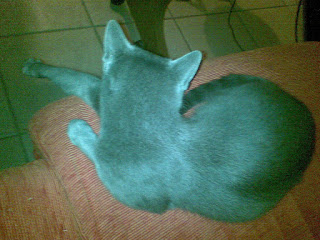 I miss my wonderful nieces alot:

I can't wait for spring to come and I will meet them at Raca, where my sister will bring them! They're growing so fast, Teodora is almost at my shoulder! But Flavia is still small, maybe next time I'll see her I'll be able to understand more from what she's saying!
I've also been riding this weekend, but my results are hardly to be seen, as I could't trot... here we are waiting inpatiently for our turn: 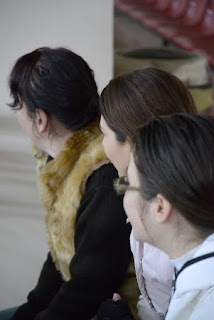 of course M was just a spectator...but he's really tempted to try it, so he will shurely do it if we take him with us a few more times... 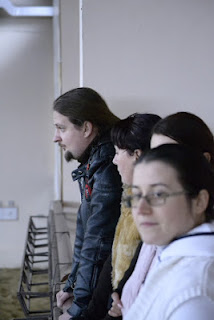 and here I am on Tamisa: 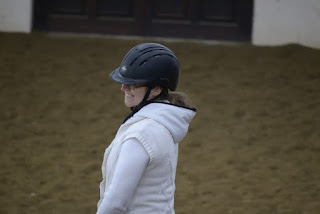 all smiles at the beginning.... 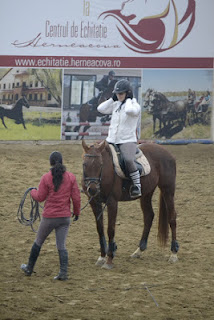 and trying to fit the hat... 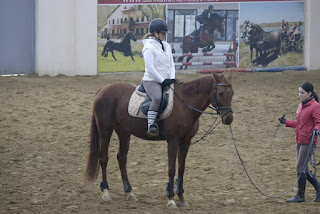 ...and started to spin in circles around my trainer Irina...but poor Tamisa had already been held at cord-length for more than one hour before me, so she wasn't cooperating, she was really stressed out and that is why she refused to trot....so I told Irina that it may do her good if I took some strolls around the manege with her, and I was right, the poor girl was really cooperating and going anywhere I wanted. I then made the difference between this nice girl and Mary, whom is hardly listening to me, she's a spoiled brat! but I still love her! In fact, I love all the horses there, they have such different personalities and sweetness! 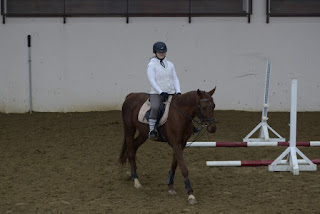 Here  we are strolling around quietly. I have to admit I enjoyed it alot 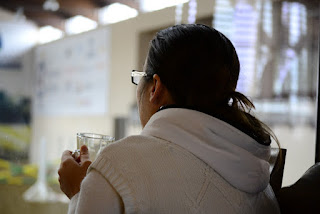 but I was really dissapointed afterwords, because I felt that I didn't evolve much, without the trot, but now that I think back it was really ok just to be with the horse, as now I realize that at one moment I really was alone with her! 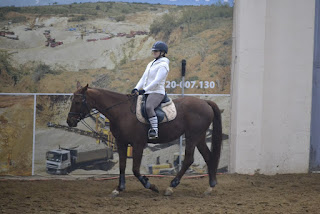 Here's my dissapointed face, but I can't blame the horse, she really had enough of spinning in circles! 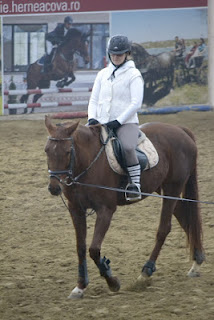 this is a photo before the ride, anxious to go there and do wonders... 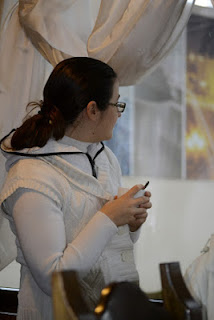 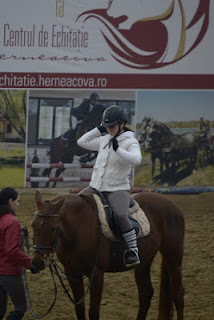 ...but, as I've said, it's not the horse's fault that I didn't really exercise yesterday...I am just glad that I understood her and we really got along very well when walking peacefully, she's really a listening girl! It did me good, although for the moment I was so dissapointed that poor Tunde didn't know what to tell me to make me feel better. But, as usual, I found the good part of the affair, as Tamisa really showed me what a good horse can be like, and I liked it soooo much to be able to steer to the left or right whenever I wanted! I must say Mary is a looker, but she can't teach me too much in this begginner state I'm in right now; so I need a horse like Tamisa to teach me. Too bad she's not comfortable with the cord, but next time I'll be more careful and ask for one who is, or maybe if I had ridden her first she would have listened...
I was talking to Tunde last night and she said that it would probably take about a year untill I would be able to make a horse trot well enough as to be left to do it freely; well I don't know what to say, but I am decided to give it a better try next time!
All in all, we all had a wonderful Sunday, we were at Herneacova at about 11.30 am, and left after 3.00 pm, that's about half a day spent among horses and I enjoyed it alot! As we all did. It's really so fascinating to see that we started only 3, then we were 5 and now we were 8 visitors. Of course, we were only 5 girls to really ride, but I have to say the virus is spread! I know I can't go back now, my only option is now to ride, and ride, and then ride some more! It's really funny that, after just watching the horses for a few turns, yesterday we all fed them all! from first to last, each horsie received at least a few treats! And we almost know every horse and can recognize them! I just feel guilty that there were some horses we left out, but next time I promised myself I would give them attention also, as now I've realized that they can be jealous, they have such humaine feelings! It's almost scary! I just found out that these 3 girls 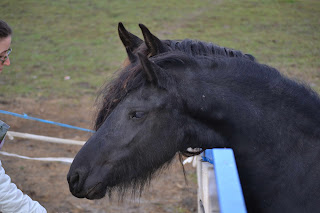 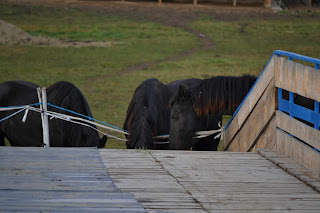 are Mary and Tjikke's girls! Isn't that nice?? Too bad two of them will be sold out! I wonder who will be the lucky owner of them? Still, I found out that Isis: 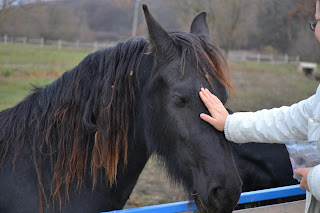 remember her gentle face? will remain with us! That's wonderful, but she is still very young, 2 and a half years old only! I'll have to visit them next weekend! I hope we can all go riding again, as we have two more sessions to spend!
They also have a miniature horse there, I am just so sad I don't have a picture of him! We totally forgot to visit him and the 3 young girls above! We were to busy rubbing Mary, Tjikke, Adonis, Nona, Silvestru, Tamisa, Carina, Louis and Cezar, so we forgot for about 4 hours that there was a world outside Herneacova's stables!!!!
Well, that'a about all I've been up to; I hope I did't bore you to death with all my equine details; as for future plans, I am waiting for a better weather, I really miss my bike, and all the brown grass ouside my office window makes me sad! I want Spring!!!! I just couldn't resist posting this: 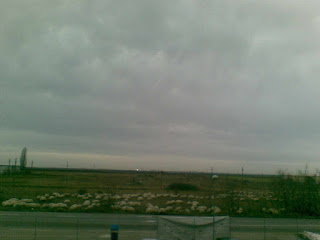 this is my current view from my office window, those are real sheep across the street! They brightened my day instantly! although you can see the steely sky!
Thank you so much for reading! Bisous!