Update on my riding day

Sorry for this long silence, I caught a bug last week and had also so much work that I just wasn't in the mood for writing, and I didn't want to spoil my sharing with you of my riding experience by some short-to-the-subject post.
First of all, I think I haven't had that much adrenaline since I first rode a motorcycle, which was like almost 4 years ago. Now don't start thinking that my life is no fun, it's just that I'm quite a down-to-earth person (no matter what my friends thaught of me whan I started riding a bike!:-P), I really don't like taking chances when it comes to my safety. When my colleagues asked me why I was so stressed out about going to ride a horse, I told them that it's easier to control a motorcycle, which does exactly what you want, but a horse is a being, it has a mind of its own!
I am so sorry that my pictures were so blurry...we didn't dare use the flash because we did not want to scare the poor horse, she was frigtened enough probably because of three crazy people staring at her!
I was really tense when I wanted to mount up, so I guess Lizette sensed it, since she pulled away and I got up only after a second try: 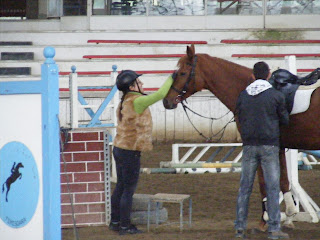 I had no idea back then how right I was about the horsie having her own mind! I mean it was almost a piece of cake while the trainer was pacing nicely in front of my ride...but after he went aside...of course I couldn't be firm enough as to make poor Lizette understand what I wanted, so we both ended up looking at a wall, I without knowing how to make her move either right or left, and poor her not knowing what was the desperate lady on her back trying to explain...
In the end the trainer came laughing and saved us, so then he probably understood that I was serious when I said I had really no idea about riding! I was even very surprised to realize that the horsie really shakes you alot when she moves..I hadn't expected quite a ride like that, and it took me some time to get used to the move..it was like...being on a ship in full storm!
Just to proove to all my friens that I really was on a horse, since it's been more than a week and I haven't shown any photos, here I am riding: 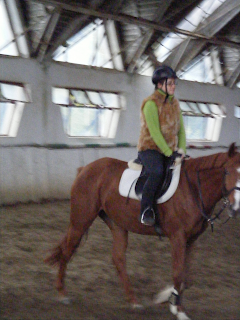 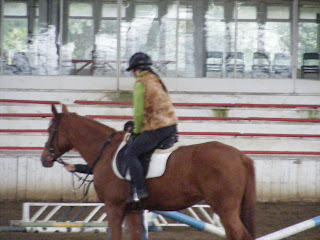 ...as you can see I also walked without the instructor, who by the way was awesome!
....and here's my daring friend, who was almost as nervous as I was... 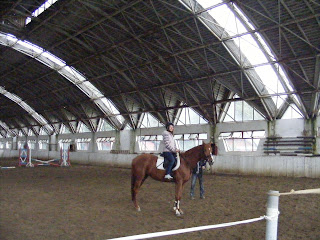 In the end I began liking it so much that I wouldn't get down....but once I did so I started to feel all my muscle tremble from the effort....it really is not that easy, especially if you're very tense! I really feel sorry for poor Lizette for coping with my stress!
The funnyest part (it had to be something, right?) was when each one of us tried to get down...and remained stuck! taking turns, we each laughed of the one hanging by a foot stuck in the saddle...my friend and my boyfrined both laughed harder, since I'm the smallest, it is harder to glide from the horse when you have short legs...and you're two meters from the ground....not that it was very easy for them either...but they still made fun of the little guy!

I will have to see  Lizette soon, I really want to ride again as soon as I have some money to spare.
Unfortunately it is really expensive, but that didn't stop me before, so it won't stop me from now on either!
Here's one last photo which is clearer, all others are blurry, it was starting to get dark. 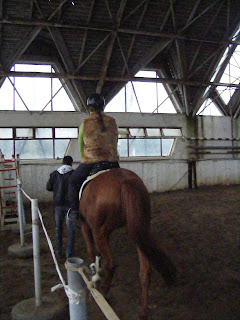 I really had fun even though you couldn't tell from these photos..even M got to make some rounds...we were all three as happy as could be when we left...all shiny eyes...and we made wows to come back with some apples for all the beautiful horses out there!

I hope you enjoyed riding with me;
bisous and  thanks for stopping by!