A Game of Thrones by George R.R. Martin book spoiler

I'm half through "A Clash of Kings" by now; and all I can say is that I am still in love with the plot...I can't stop reading! And how could I, when it has all I love in a good story: kings and knights, honour and strength, family traditions and intelligent animals related to them, and "magick", lots of it....
It would be hard to be brief about 4 books which together make for almost 2000 pages, but as I only completed the first one, I will make a short description of it, mabe I will rouse someone's interest..someone like me, inlove with heroes and knights, swords with names and family banners and symbols...lots and lots of symbols....
So, briefly, the first book introduces us in a magical old place, called Winterfell, the home of the Stark family. An old rooted family, with kings of old as ancestors, with much pride among the new generation, and much wisdom for the old. Up north from Winterfell lies The Wall, an ancient human-made construction which separates the civilised world from the Wildlings, fearsome savages which plunder and kill, and which are thus not able to cross on the other side of the Wall, being always hunted down by the men in the Nigh't Watch who guard it. 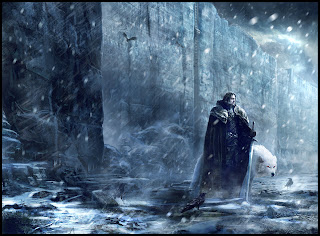 What is very interesting in general, is the fact that summer and all other seasons hold for longer than what we would expect, for example the summer our story begins with has been for more than 10 years I guess, and so the nowborn have no ideea about the cold of winter.
The whole story is structured upon several plans, i.e. the Night's Watch seen through Jon's eyes, the bastard son of Ned or Eddard Stark of Winterfell, another one of Eddard Stark, one for his wife, Catelyn- Rickon's, Brad's, Arya's, Sansa's and Robb's mother, each of them (except for the smallest one-Rickon), having their own chapters and stories, another one for Tyrion, the queen's dwarf brother, ant the last one for Daeneris, the last one of the Targaryens, an old family that once ruled the Seven Kingdoms, which is the realm where all our action happens.
The story begins per-se with the king's visit to Winterfell, where he comes to ask his old friend and swordsman, Ned Stark, to take the position of Hand (like the next-in-power), since his old counselor had died of a strange and quick disease. Ned accepts because of his duty to his king, but with a heavy hart, and he is right to do so, as the King's Landing, where the Iron Throne of the kingdom lies, is a real nest of vipers, the first and most dangerous one being the queen herself.
One key point of the whole story happens when, comming from the execution of a deserter from the Wall, the Stark children find 6 direwolf pups, one for each, including an albino one for the bastard Jon. Those wolfs will bind together the entire story, as I felt from the beginning.
As a king always travels with his court, so does this one, Robert Baratheon by his name, and he brings to Winterfell, among others, his wife and children, but also the queen's brother, Jamie the Kingslayer. (his name comes from the fact that he killed the last Targaryen king, who among others ordered the murder of Ned's brother and father....so it's not such a bad thing after all...).
As Bran wanders on the rooftops of Winterfell, he sees the queen and her brother comitting incest, but Jamie pushes him and he falls, not remembering for some while (in the second novel) what had happened.
Ned still has to go with his king, and he takes Arya and Sansa to court with him. Sansa becomes bethroted to Joeffrey, the king's firstborn, who turns out to be not his son, but the Kingslayer's (see what I mean when I say it is difficult to render the whole story?), and Arya looses her wolf, Nymeria, who is chased away when she bites Joeffrey. Because they do not have the responsible wolf to punish, the queen demands the death of Sansa's Lady, who is killed by Ned, not letting any butcher kill the direwolf, who was part of their family.
So, one wolf killed, one chased away, the girls remain without protection when things get complicated in the capital, only Arya being capable of sneaking away (due to her boyish nature and skills) from the castle when things get rough. Meanwhile, being afraid that Bran might wake up and tell what he saw, the Queen sends a man to kill him, but he is saved by his wolf, Summer.
The albino direwolf, named Ghost has his own role in one of the Stark children's life, meaningly in Jon's, whom he rescues from one of the Others- dead men rising by some plague on the other side of the Wall; and Robb's wolf follows him into battle where he guards his master as well. The one belonging to the smallest kid, Rickon, gets the name Shaggydog (the boy is only 4...), and while troubles gather over Winterfell and the boy becomes wilder and angrier, the wolf becomes the same, even biting some of the people. (Personally, the smaller kid's story and Jon's have impressed me the most by now.) 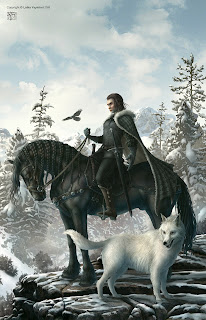 There are two more characters left; namely Tyrion and Daenerys. The first one is the queen's imp brother, grotesque and twisted, but apparently the only one in the most powerful Lannister family with some sense of right and wrong; and Daenerys is a 14 years old beauty who is being married away by her degenerate brother to a wild horselord, somewhere over the Narrow Sea, which guards them from the wrath of the Baratheon king.
This is about all very very very shortly put, as the novel has about 700 pages, but I hope I managed to make it appealling, without giving everything up.
By the way, you can watch the movie, which is very close to the book, on vplay! Still, I would recommend reading the books first, as always!