I recently stumbled upon this photo on a blog I've just discovered (http://dsdnt.blogspot.com) and I was more thank shocked! 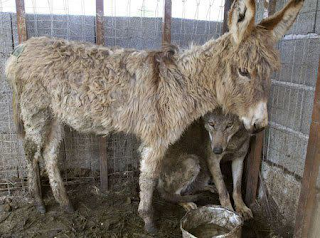 It is said that this photo has been made in the region of Northern Albania, where some bored farmers or so caught the wolf in the photo, and as they had the old donkey locked-up because he was useless;  they have thought to have some fun by watching the two animals fight eachother. But, as we can see from the photos, the two became best buddies, and I am so happy!
People should learn to team up for a better living, and not jump at eachother's throat in order to survive by pushing down others....and killing the weakest....If these two frightened and ruined animals can pass over the law of the jungle, why can't the most developped being of them all do the same?? I guess it is true that all that separates us from other animals is our culture....without it we're just another link in the chain...
Have a wonderful Wednsday!
Bisous!
Publicat de ana la 15:09