Since the beginning of the human race (whenever that might have been, or how it started!) men have always tended to gather in groups of individuals with similar interests. Probably in the beginning just for hunting and protection through numers from bigger and stronger preditors, further on the timeline because of the need to communicate and trade, even further in order to conquer smaller groups and thus first of all master these groups and later to include them into their rows.
One particular gathering of individuals I agree upon is the one with the intention of learning (remember stormbraining from school classes, and how it helped ?) This I like to call the scholars group. 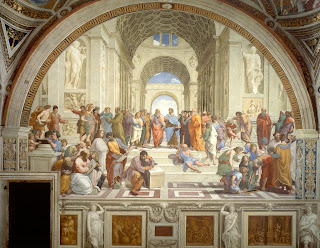 (The School of Athens by Raphael Sanzio, source: Wikipedia)

When interests started to become more and more varried, the mostly encountered groups are formed due to the social level/status, i.e. due to birth and fortune, occupation and education.
Reported to my everyday life, I might say I belong to a strange range of social groups: bussiness, motorcycle club, teacher, student, believer in God, book reader, music lover, and last of all Latin reader. I must admitt I never thought of looking up on the web for Latin -o- phil-es (hi hi I made this up!), but once I decided to learn it, I found tens of blogs, sites, books, that are a real help and support. So, it is really an online social group, with more than similar interests, since I realized we are all obsessed with the classical period. And as in all social groups, the ones around you influence much of what you do, what you read and write, and I must confess they nurture my ambition for learning Latin faster, since I want to be able to read everything they write, but most of all, I want to be able to deschifer on my own all the beautiful old Latin written books I downloaded as PDF from the web. I am immensly grateful to those who took their time in scanning these works of art! I even have a few books written in Latin at home! I proudly recently bought "De Viri Illustribus Urbis Romae" by Lhomond- a Romanian edition printed in 1929!
My conclusion to all this is that, if Latin won't make me richer, it's shure as Hell it will make me smarter!
(please take this last phrase with the same huge dose of humour as I intended it!)
Until next time....des bisous!

p.s. the picture above I use as the background image for Google! I love it that way, and it trully suggests what I think; that the Internet can be a school for us, as lons as we know how to use it!