...or at least not many people, except of course for my family and close friends. I like meeting new people but only up to the point of knowing about them as much as I need or want to know, as I am not curious about other people's life, unless it affects mine...I know this is not very nice of me to say, but I'd rather be honest. What I guess you might have realized is that I, on the other hand, love all animals. Especially the helpless or hurt ones make me cry, which is more than I can say about people. The only ones that make me cry are old and helpless people, neglected by their families, like I've seen last evening on TV. A very old woman, 90 or so, was being fined by the state because she (or rather said her family) didn't check-up and instead received for many years now an allowance which was not really hers; and now the poor old lady had to pay from her own small allowance a monthly amount, which would probably be by the end of her days. That really made me sad, as I think that there are so many billionairs out there who manage to escape fines, but this poor old lady can't, especially since she probably didn't see a penny of those money, but her family spent it.
That is a sad case, and that is my main reason for not watching TV.
On the other hand there are the animals. As you could see from my photos, all my cats are of mixed breeds, no pedigree there! Sheeba was collected together with poor Mishu from an apartment building's backyard, and that after much struggle to catch Sheeba, who was (and partially still is) very wild. Jackie was picked-up from a bar in Hunedoara, being nobody's cat and probably not facing a very happy future...and Eisidisi is the only cat we have received from M's gradmother as a companian for Sheeba after Mishu passed away so suddenly. So I can say I trully do not understand people who pay for pets, when there are so many preety souls out there, and you can see my cats are healthy and beautiful! And so smart! That's just my choice, nobody has to think the same or do the same, it's just my belief!
All this was triggered by an experience I had today when in my office. You remember that from my window I can see a flock of sheep. Well, with Easter around the corner, almost all of them are mommies right now! And they have beautiful babies that run and run all day long. They make me smile each morning, and when I want to unburden my mind I just take a glance out the window of my office. Today we had an awful weather, all day long rain and clouds, and misty cold during the morning. I got to see my wonderful neighbours only in the afternoon, and then one of my colleagues noticed that one of the babies was apart from the flock and from his mother. His poor mother was trying to get to him, but he was preety far from the flock and near an old building, where three huge dogs were chasing his poor mother away over and over again! You might imagine my despair when I saw this, I looked out the window for more than half an hour not being able to do anything but stare and cry. Poor little helpless thing was laying on the grass, izolated from his mother, who was back with the others, but very alert and still trying to get to him! And she tried, and tried and tried, but those mean dogs kept chasing her back! Now I do understand the laws of nature, but normally this shouldn't happen, as a sheperd should always watch for his flock, right? Well, there was no such guy in sight...so I stayed, and waited to see what happens, and when I saw that nothing does happen, I took my scarf, my cell phone (now why in the world did I do that??) and my umbrella, and got out of our building. 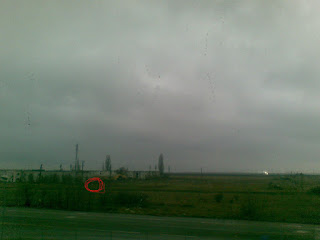 The spot where I made the red ring was the place where my poor little sheep was laying on the humid grass! All the other sheep are on the far right, you can't even see it in this picture; that's why I had to make this one: 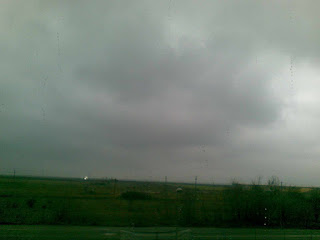 ...and on the right side are the sheep....see how awful the weather was??

Once I was on the other side of the road I started walking through the wet grass and mud (thank God I have my riding boots on today!) and I had to make a small detour as I had no idea there was a ditch with water and when I was on the other side the dogs started to bark at me. Now I am terrified with big stray dogs, (especially German Shepperd mix!) and of course today was no exception, but I had the poor baby in sight and I started yelling furiously at the dogs, who by some miracle were afraid and went back!!! I paced slowly and took the poor cold thing in my arms and my heart just melted! he was sooo cold and wet and could hardly cry! I can't make you believe, but the poor mother was just looking at me like in wonder when she saw me taking him towards her, and she even made a few fearful steps in my direction!
I of course see stuff like this on TV, how mothers care for their offspring, but I have to admit that I had no idea they are soooo attached! And I call myself a village girl, right????
I  managed to bring the baby to his mother and then went back carefully not to step into sheep poo (which I didn't totally manage to do, btw, my shoes stink...)but my clothes smell of sheep from having the poor baby in my arms....but I tried not to hold him very much in my arms, as I didn't want the mother to abandon him or stuff like that if she felt my smell on him, and when I put him back on the ground I tried to leave him on his own legs, but he hesitated at first, but after holding him a while he managed to stand! His mother was coming closer to us now and he turned his small face towards me and I melted, but got quickly away, as I didn't want to scare her more than she already was.
I still feel strange about the feelings I felt coming from that poor sheep who almost lost her baby....it's so strange that I can't even put it in words. And I know that some might try to say that it is only my imagination, but I know what I saw and what I felt.

I hope you have a wonderful quiet evening!
Bisous!
Publicat de ana la 17:44