I just had to share this:
I liked the clip above, it almost made my cry, although I don't know if horses have such a long memory....I like to think that they do have a memory of the one who raised them, especially if it was a close bond, but I am aware of the fact that the commercial exaggerates it...Anyways, it must be a priviledge and a luck to be able to take care of a foal and see him grow into a beautiful horse!
I can imagine "our " horses back at Herneacova may remember us a little, from one appointment to the other, but not right now, maybe after a year or so of constantly going there, and not because they wouldn't have the capacity to remember us, but because they have to deal with so many strangers, that I guess it must be deconcerting at some moment.
It's things like that that make me realize how little do I know about these beautiful creatures, how much I still have to learn, and also, not without a certain degree of saddness, how late have I realized what I trully want.
I wonder why did I wait for so long to try riding, when this was my dream as a child. I could have been barely been 10 or so when this:
was my absolute favourite movie in the world. This and Lassie. I would dream of riding over the fields on my beautiful horse and my beautiful collie would run at our side. I had a very rich imagination....
I could say I've always been inlove with animals, from my rabbits, to my cats and dogs, and even the chicken and ducks. I had a big and very old german shepard- Spic- when I was about 5 or 6, and he was my riding pony. It's funny how I don't remember so many things from my childhood, but Spic has remained engraved in my memory. I must have loved him very much! And I guess my best friends were always my pets, since I was not a very sociable kid outside of school. I liked staying indoors. And I still do.
I can also remember my old white cat- Danila, which I adored, I remember exactly his 3 black spots on the back, and I couldn't have been more than 10 eighther! Then there was my dog Fetita, she was a metis of some hunt dog, as she was hunting rats and mice and rabbits all the time. I loved her dearly, and when she had baibies I was the only one whom she let near them. I also had a pekinese- Lucy, she was a spoiled brat and I didn't like her very much, but by then I was already a little bigger, and that is why I can remember them so well. I burried them both with my own hands in our garden, and I cried the same for both, while digging the grave. Creepy information, right?
Then there were my cats while I was in highschool: Paul, Enrique and Carlos (pls don't ask :D), and then I moved to Timisoara and I had Isis & later Osiris. They were so beautiful together it still brakes my heart and my conscience that I've separated them when braking up with my boyfriend at that time... 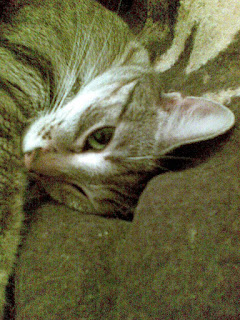 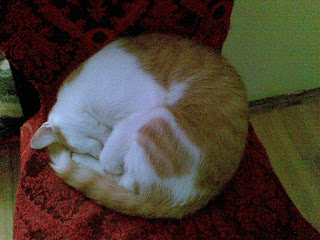 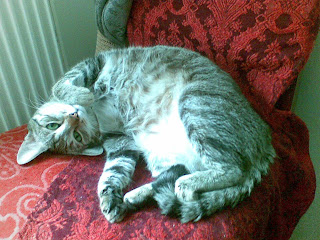 An then I moved in another smaller place and I couldn't take care of  Isis anymore, so I took her to Raca and there sha made a baby, Cezar.....whom I later found out was not Cezar, but a girl: Cezarica! I still have her and Baggy, whom you know from my other post....I have to look for some photos with Cezarica when she is older, but right now I only have this, of when she was very small: 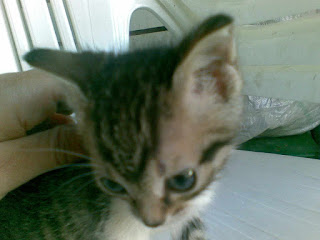 M always sais she's so beautiful and that she resembles a rabbit. She's very small, bot not very friendly, as she's always been alone....poor thing! But now she has Baggy, and before she had Paulina, whom was her companion after her mother Isis dissapeared:
But unfortunately it is sad to loose cats, but not that uncommon in the country side, as they are roaming about in every neighbour's attic, eating and stealing food, which sometimes turns out to be poisoned for the rats...and that's not all that can happen. There are stray dogs whom chase cats and God knows what more dangers...
Exactly this happened to M's old cat, Tommy, who was so lovely, but unfortunately that didn't save him from a neighbour's dog (and they live here in the town, but in a rezidential area!). I was very fond of him, and I know M suffered for his loss, because they were very attached to eachother: 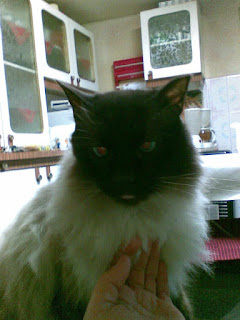 And I have to mention here my dearest Mishu, whom was Sheeba's sister, but she had a terrible accident, and so I guess that no matter how much you care for your souls at home, sometimes accidents do happen. And most of all, it's not anybody's fault!

Accidents do happen, we loose not only pets, but also people we love, friends, aquaintances, and it is sad, but  nobody can help it! And it's only natural to suffer more and remember one's good parts better after he's gone.
As for pets, I have to say that I think that the more spirited they are, the more understanding they are, the more you attach yourself, because they seem so human, so the grief is more acute when you loose them.
I have to say this post was inspired by the loss of another Mishu, a boy, Tunde's mother's cat, and I feel so sorry for them! I understand their pain very well, but I have to say that we are helpless in the face of fate!
I'm sorry if this post turned out to be a little too sad, but that's how I feel right now, one loss makes you remember all you've lost.
Thank you for reading and bisous!
Publicat de ana la 11:37