faeries!
I always loved them, since my childhood, and I always ignored, as I do now, the "mature" people's advice, that they do not exist.
Any legend must have a seed of truth, that is an old Romanian saying which I belive is very true! It only depends on how much are you willing to belive, if you have a young heart and if you agree to the fact that we, with our weak human eyes, cannot see all that's surrounding us.
Didn't you ever wonder why animals can feel danger and changes in weather much better than humans can? mabe it is because they are so naive, so open to everything that is around them. I am conviced that it is because of the direct connection to the nature that animals have, connection which we have lost a long time ago, as soon as we've started eating other animals, and our brains began to bulk up, but at the same time our own connection to Mother Nature faded away.
Did you know that elves never harmed a living creature, never cut a branch from a tree, never stepped on an ant? that they sang in order to make trees give fruit and flowers bloom? That they were close friends to all other animals around them? Doesn't this sound familiar? Like I find this awqwardly similar to the life of Indians in America. Old Indians running free over the vast lands of America, and not the ones still left today, which are sadly fenced in reservations. Don't get me wrong, I am glad for them, these fences keep them protected from this strange world outside, it is better for them, although I would have them rather have all of America, which is an utopia, I know... so this is kind of my seed of truth...

I also believe in unicorns, I always loved horses, and if they come in a pack with faeries, the better!
Now won't you say that I have the fantasy of a 5 year old? that I am a little bit retarded?? You may say anything, I am still gonna say what I mean! I believe strongly in faeries, elves, unicorns, I believe that old forests have their own old heart, I believe the Earth is still trying to tell us something, If only we would stop for a minute and listen! 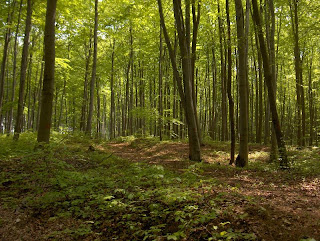 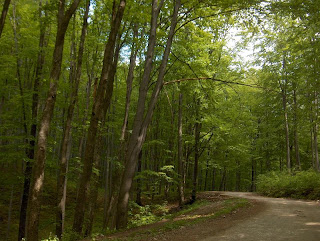 Have you ever been in a forest?? An old, dark green forest? There is such a quiet there, but still you can feel all the life surrounding you. It is exactly as if you can hear the forest breath. The pictures above are from the forest before Cheile Nerei, In Caras-Severin, where I wondered in 2009. I have never seen such a beautiful forest since. The green was so intense, that at times it seemed that the trees were almost blue! It was beautiful! As if an elf could at any time jump from behind the next tree and ask us what we were doing on his land. And this is not such an old forest, I have been some time now in the forest above my village, Racasdia, which is old enough so as to scary me when I was but a child, still, I will be there next weekend, so I guess I will take my boyfriend for a forest walk, I miss the wispers of trees very much here in the city....We shall have a wonderful picnic there! In the meantime i called him and told him about my idea of a forest picnic and he was delighted! He's just as wild as heart as I am!...:D
I hope I will have time to write some more before I go, but until then....