I have this quote glued to my office monitor: 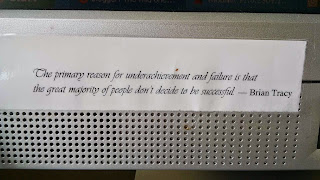 which should remind me that I need to work hard and long in order to make some of my dreams come true. At least some of them, as many will never come true probably. Not due to their impossibility, but due to my laziness, I guess. For example, two dreams are dear to me, but will probably never come true: I would love to be a writer, but I'm too lazy and like my life too much in order to isolate myself and really write. Although I know down inside that I can. I just lack the determination. And second, I would love to be a librarian, but I know that that job has a lousy pay, so I cannot afford to do it; as I need my money in order to enjoy all my other hobbies...
I love staying up late, but then the next day I'm too exhausted to do my job, let alone write something creative; and the little energy I've got I spend at this desk, earning my bread by solving all kind of problems that at the end of the day leave me dry as bone and about just as creative as a rock. I know I might be suffering from a Faustian illusion, but I truly feel that I am driven by my ambition to sell my soul to the devil for money, rather than be happy.
But one must ride, must eat and drink, right? Wondering why I put them in this order? Because there are just two things that I love better than riding (either a steel or a flesh and blood horse!), and those are reading and writing, but these two I have to shove back in line.
It's also strange how easy words come to my fingers, so to say, as I haven't been writing a single line (except boring office stuff) for a few months now, and this is my true ice breaker. I've been opening a new page on this blog for at least 10 times until now, but each and every time, I would close it without actually writing something. And I used to be good, I used to be inspired by anything. I could just open my folder of "lovely things", with beautiful photos of all sorts and I would start writing like a shotgun.
I've read somewhere toady that writing everyday makes you a writer, not necessarily writing good stuff. I agree and don't agree with this at the same time. I don't agree because I've seen so many awfull emails in my life that I whish at times to kill people for the single fact that they are murdering languages; either Romanian or English, or French, or German, it doesn't matter.
And I've seen materials written by people whom pour their entire soul into the text, but I don't quite get to touch that soul, and although I know I should be moved, I have to say I cannot resonate to their tune.  That is a real problem for me, as I am a firm believer that you do not write only with your head, but most of all with your soul. And it is simple, if the person who reads what I've been writing doesn't get a small feeling of my soul from it; then I haven't done my job right. Then again, I must be the problem for not feeling the soul behind somebody's writing.....
Returning to my idea of laziness, I must be some kind of perfectionist, if I don't want to write if I have nothing to write with my soul, as well as with my mind. The mind is needed in order to write correctly, respect all the rules of good and correct writing, while the soul is the one that gives the spark to the text. I'll write about shoes with just as much passion as about a good book, just as long as I feel the passion for the shoes. Ok, even I've got a limit, and that would be writing about purses....I find them annoyingly non-important, and people give them so much attention! I would prefer a linen tote at absolutely any time, but that doesn't mean I don't have my own share of bags, they are just a little bit on the crazy side and rarely used...(see? I can write about them too!).
One subject I love, but am too lazy to write even about it is food. However lazy, I have gathered  a pretty amount of photos to post on my food blog (my raw path) , and I intend to do that too. I just hope my brain is rested enough to write there too, provided that this ice-breaker works...
And there's one more thing I love to do: walk in the forest, under beautiful old trees, watch up often, see the sun streaks, listen to the birds chirp...but of course, you can read in the forest, eat, or just as well stay and relax...so I usually combine them; and if I can pick flowers of herbs, or even berries along the way, it's even dreamier.
And I love music...I love it so much that at times it hurts, and it always depends on my mood what I'm about to listen. However, there's one genre that will never make me wrinkle my nose, and that is classical music. I was listening to an aria  in the morning in my office, and a colleague said I was special because I could listen to it at such an early hour. But then I just realized I could listen to such music at any hour of the day or night, without feeling that I don't like it. Does that make me a snob or just a weird person? I don't know, but I am a reading, writing, eating, drinking and hiking biker...so why not a classical music -listening one too?And if I started this post with a photo from my office, I will end it the same way: 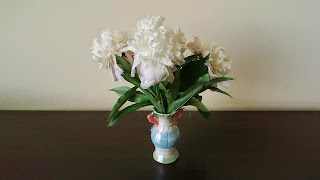 with the flowers received from my colleague this morning. They smell heavenly, and have brightened my cage a little....

With the promise to write more, soon: